We have a lot to be thankful for from our quail. It was the Spring of 2000 when we came to live here permanently in the wilds of coastal Western France and my greatest fear was that our then embryo forest garden, with its riot of flowering plants, trees and shrubs would make Summer unbearable for Andy. We already knew that privet (Ligustrum Ovalifolium) pollen was one of the key triggers for his hay fever and also the 'false' Acacia or Black Locust (Robinia pseudoacacia). Ironically, this latter, the flowers of which would make his eyes swell up even when he was entrenched inside the house, is an anti-spasmodic and in particularly used for inflammation of the eye! 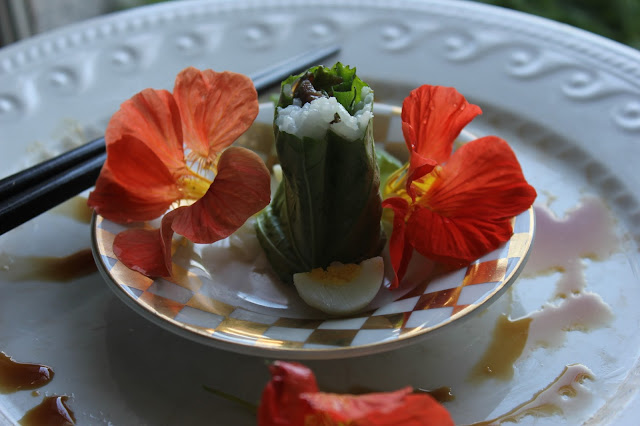 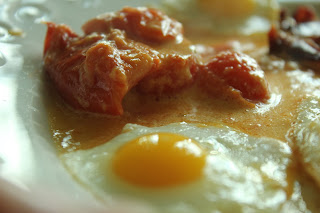 
....a substantial lunch or supper dish 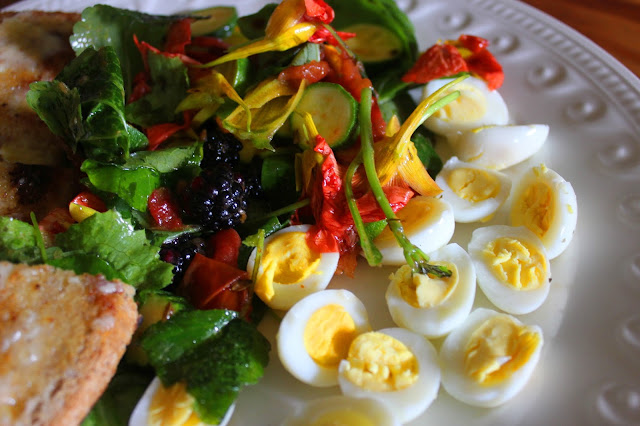 Food and Medicine - Literature and Linguistics


The first ever quail I came across were in school and in the play Anthony and Cleopatra, I remember writing an essay on Shakespeare's clues to the doomed nature of the romance using as one of my supporting quotations:
'........; and his quails ever
Beat mine, inhooped, at odds.'
Proving that like chickens, quail were taken out of the wild, in this case by the Romans, to fight rather than for the culinary and/or medicinal value of their eggs or meat. Similarly, I remember seeing the quail appearing as a letter of the alphabet, if we can all it such, in Egyptian hieroglyphics. It's my conceit that the quail chick symbol should warrant a more comprehensive explanation than that of just a mere letter, over which, despite the Rosetta stone, there still seems much to debate. Here the character/symbol of the quail chick, above left of the winged figure of Isis, is used in a mural in the tomb of Seti I in the Valley of the Kings. Although in the rubric depicted here, the quail chick may have a purely linguistic use, it is interesting that the image is that of the Osiris ritual. Iris, her wings outstretched preparing to seek the scattered body of her dead husband and in one version of the story, restore him back to life. In many cultures, Hindu, Russian, Chinese.., the quail was seen as a harbinger of Spring and thus also associated with a  symbolic return to life or reincarnation. The Bible also has an account of the saviour of the Israelites by consuming a flock of quail but with a proviso as laid out below.

It is interesting that the ancient Greeks certainly knew of the quail's seemingly magical ability to cheat death and survive on foods toxic to humans. Now referred to as coturnism or rhabdomyolysis (a form of acute renal injury), this is a condition suffered by hunters who eat migrating quail, the flesh of which can be toxic. The reasons for this is complex and as yet unsolved, in particular because only two of the three main migratory quail routes have 'poisonous' quail. To further complicate things, one route has them in Spring and the other in Autumn! Some researchers believe that it is the quail's consumption of  poisonous seeds, plants or insects, which make them toxic, others believe it is down to flight stress and/or a combination of these factors. There is also the hypothesis that the patient's own genetic make-up is involved and in particular a mutation which inhibits the sufferer from ridding his system of the ingested poison, making the condition akin to favism. I will put a link to an article at the end of Part Two that explores this interesting avenue into the ways of 'poisonous birds'. 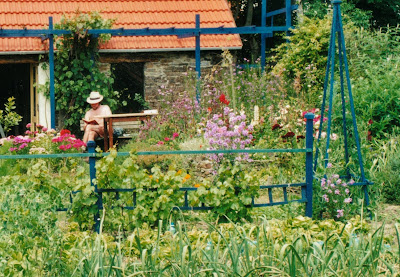 Similar to the fantail dove, the quail was also associated with love and romance, with a caged quail being given as a love token, the symbol of an imprisoned soul. So it was with much love and effort on everyone's part that we set about to return the Spring and Summer to Andy from several decades of misery and sneezing.

Quail Eggs and Meat as a Medicinal

It was in the very hot Summer of 1976 that Andy first started with hay fever and it was some time later that he started working with a mineral oil and developed eczema. Although we started out to deal with the former, the fact that we got rid of the latter too was an incredible bonus. It may seem to some that it was only in Victorian and Edwardian England and through the radio manifestations of Sherlock Holmes and Doctor Watson that people used to refer to 'pea soupers', or industrial heavy yellow smog. However, even when Andy was walking to school in the mid 60s, he had to wear a scarf about his mouth and around his throat to stop himself from choking on the toxic fumes. This was in the Industrial Midlands, at that time still the UK's centre of heavy industry and manufacturing. My guess is a combination of pollution and pollen had triggered this condition and our mission was to get rid of it. I'd read about quail eggs in the university library back in the UK and had started to look into ancient Japanese and Chinese medicine. I had read that in the 12th Century a Japanese Emperor with advanced TB had been cured by eating quail and knew that if I wanted organic quail I would have to raise them myself. 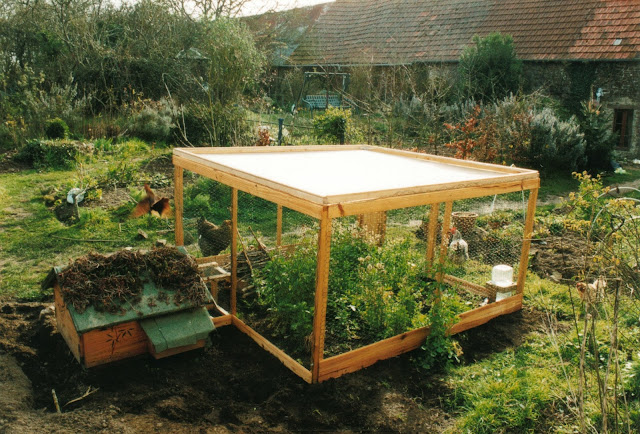 There wasn't a great deal of information to be found at this stage but I just went on the premiss that the more you allowed the bird to feed naturally the better. In these early days and within the confines of a predator safe area, I tried to let them have as much freedom as possible. Above is the quail tractor we devised to move around the garden. I bought my first quail from a traditional French country market, which has local small producers but I later found it better to visit people in their own home and see how the birds were raised. I must say it was not a pleasant experience, people seemed to have no compunction to fit the greatest amount of quail into the smallest possible cage. The only quail I ever found outside were in a small shed, on a concrete pad with one side open to the elements and covered with small gauge chicken wire. In the worst possible cases I came across, quail were crated in industrial wire cages stacked up on top of each other with artificial light and with the birds in such poor shape, their backs clawed by males and pecked by distressed and stressed-out females. At one home I found quail attacked and fatally injured within these cages, the owner obviously thought nothing of it. I actually felt so bad I bought some, hoping to get them back to health, needless to say they were too far gone. One thing that struck me was, that whatever the final outcome with regards to Andy's cure, just being able to see our quail coming out with a hop, skip and a jump into the open air and/or seeing them demolish a lettuce was a joy in itself. Once we had the greenhouses constructed and the possibility to use my neighbour's meadow for free-ranging afternoons, things were even better. 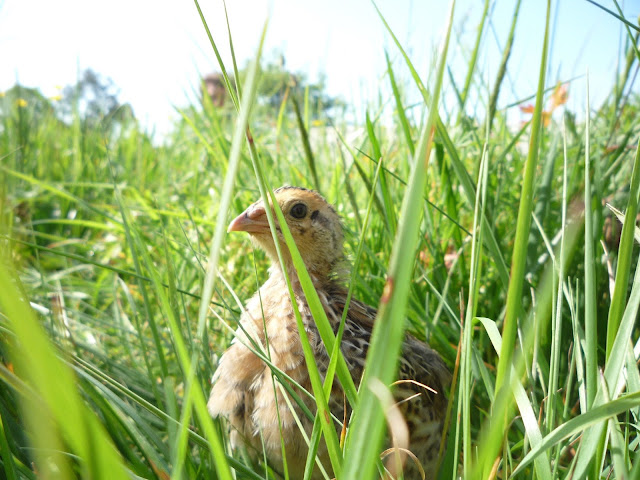 We must have succeeded in our quest to raise quail to lay therapeutic-grade eggs, maybe it was the food, the lack of stress or a combination of both. For it only took a couple of dozen eggs, eaten lightly boiled and Andy was hay fever and eczema free and has been so since 2000. To show how new and interesting this all was back then, we were actually featured in a Japanese alternative living magazine. At the time I was told and had read, that it wasn't even certain what element in the quail egg was responsible. This for the some 34 cures of specific diseases and conditions, my friend the Japanese journalist identified when she researched around the piece she wrote on our quail. I am now aware that this was not the case but rather that a comprehensive body of research had dropped under the radar. 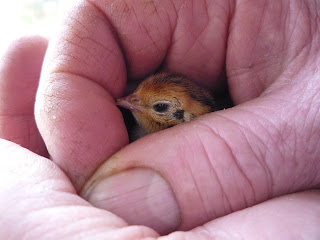 Meet me in Part Two link below.


It you have enjoyed this blog and found it interesting then please think about subscribing, sharing it and/or commenting. Please also feel free to ask questions.

All the very best,

Live Link to Part Two where I chronicle the fieldwork and  clinical trials of quail eggs in the 1960s, our own success with the treatment of eczema and hay fever, including how and how many and my changing quail set-up to breed the 'wild' back into my quail.

Labels: a history of quail eggs as medicine, getting rid of hay fever and eczema with quail eggs, health, how I raised quail organically for therapeutic grade eggs, starting with organic quail 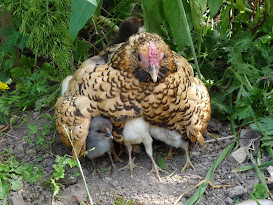